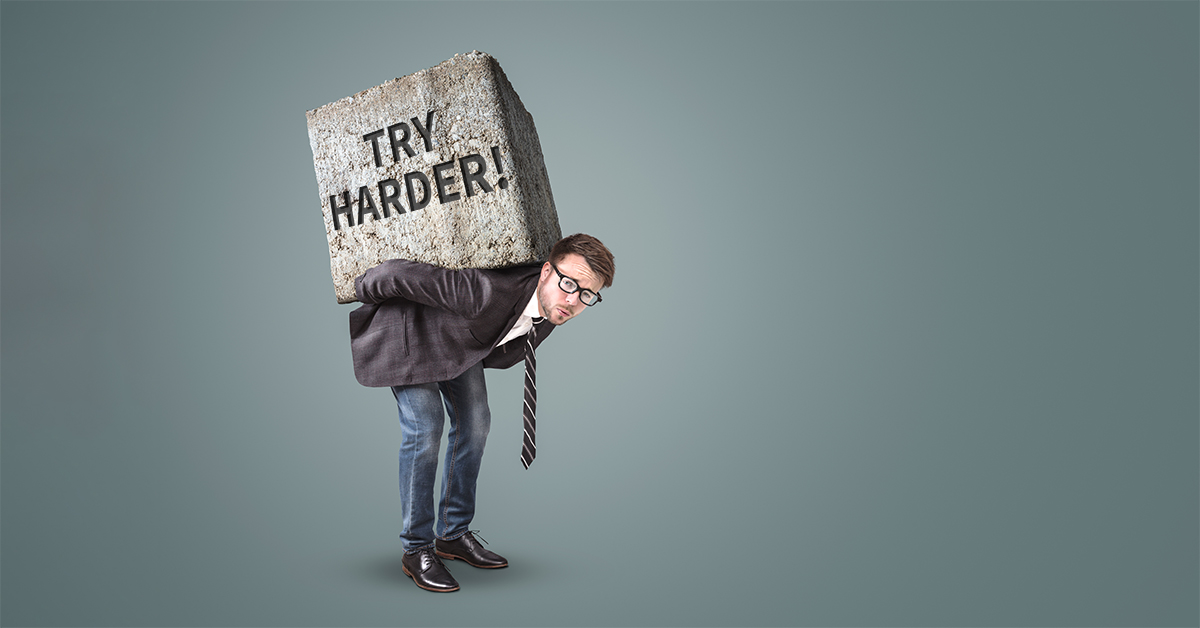 A series of small improvements can lead to big progress, but you need to change people’s thinking to get sustained improvement. Otherwise, people will keep doing the same things and will just try a little harder.

Starting the process of real improvement

Trying harder may work for a while, but it rarely lasts for long and it’s never the source of sustained improvement. You need to stretch people’s thinking to generate meaningful improvement, and it always starts with a worthy goal.

Let’s say your business has a five day turnaround cycle. Why not ask how you can get it down to four days — or three?

“If our business success depends on cutting our turnaround time by a full day — and it does — then what stands in the way of doing it?”

People’s first reactions will be “that’s impossible. We’ll never be able to do that.” But after some thought, creativity will kick in, and someone might say, “well….I know we can’t change X, but if we could, we could move things ahead much faster.”

You’ll respond: “Nothing’s off the table. We can blow up our entire system, as long as we put together a new one that works better.” Someone else will pipe in: “Well… if we can really blow it up, how about doing Y?” Pretty soon, people will believe in your commitment, and their thinking will become even freer — as they work towards a real solution.

But unless you get them to stretch their thinking, people will just try a little harder. You might get a short-term improvement, but you won’t make a real breakthrough.

In the early days of the oil industry, oil barrels were hand-soldered. One day John D. Rockefeller was walking through the Standard Oil barrel plant and asked a welder how many drops of solder he used on each barrel.

The man said: “I use 52 drops.” Rockefeller asked whether he had tried to use 49 drops. He said “no,” but he’d try. The next week, Rockefeller was walking past, and the man said “Mr. Rockefeller, I tried 49 drops and it didn’t work, but I did find a way to do it with 50. It’s faster, and no leaks!”

The two drops of solder didn’t matter at all, but fewer steps did make a useful difference in throughput. All it took was a simple question about how things were done, and a willingness to try a new approach. That kind of thinking often encourages people to continue looking for even more improvements.

You have to stretch people’s thinking to accomplish meaningful changes.

Trying harder only lasts for a little while.

Many of your processes might benefit from exactly the same kind of approach. Why not start with sales?

“If our business success depends on us attracting more customers like Acme — and it DOES — then what’s standing in the way of us doing it?”

“If our business success depends on us attracting more salespeople like Courtney — and it DOES — then what’s standing in the way of us doing it?”

You can use the same approach for operations:

“If our business success depends on us cutting our turnaround times by a day — and it DOES —then what’s standing in the way of us doing it?”

Now listen, take notes and encourage the exploration. Then move promptly to decide on a next step: who’s going to do what, and when will it be ready for further discussion? And when you’re done, make sure the change is implemented solidly, or old habits will resume and you’ll have lost the gains.